It begins. I arrived in Two Rivers this morning with a sense of anticipation I don’t think I have felt in my adult life. It was that butterfly stomach, nervous excitement that keeps you up at night like a child trying to sleep on Xmas Eve. I have been staying in Manitowoc, the (slightly) larger town a few miles a few miles south of Two Rivers (or Trivers as the locals call it) for the last few days getting used to my surroundings. Having previously only seen Two Rivers in a prolonged Google maps street view binge and in the documentary, Typeface, I wasn’t too sure what to expect. Access to the town is difficult for those without a car (ie.me), during it’s prime years a rail road ran all the way to the Museum(then a factory) to send it’s freshly cut type all around the world. A new cycle route between Two Rivers and Manitowoc may prove useful later in my trip, but for my first day I decided turning up already exhausted and sweaty wouldn’t be ideal. So I sat content on the hourly bus from Downtown Manitowoc, peering out the window with wide eyes. 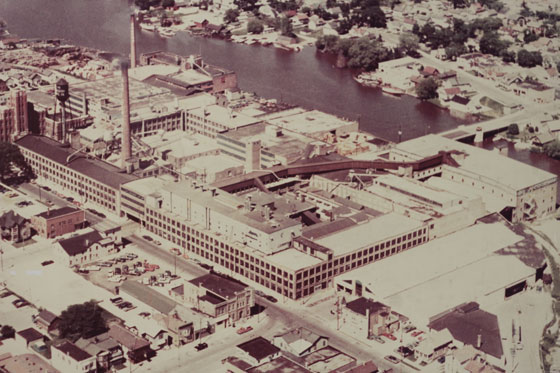 The Hamilton site strikes an impressive silhouette against the town, it runs north to south, one block East of the main street of Two Rivers and seems to stretch as far as you can see down the road. The site is so large that half way along the building a road bisects it, with the two halves remaining joined by the upper floors forming a bridge. A huge Hamilton sign runs across the upper floors, a shiny blue against the worn red brick of the building. Viewable from most of the town is the tall red brick chimney of the Hamilton factory, it’s hard to miss – the beautiful white brick text that runs down the chimney is a constant reminder of the buildings industrial past. 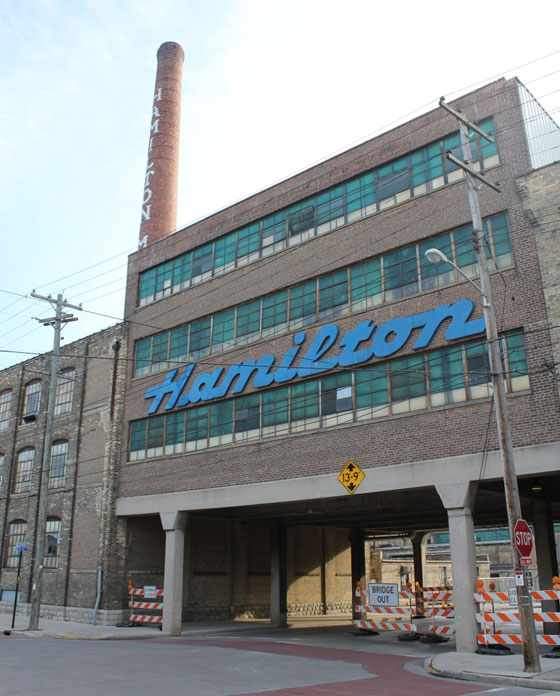 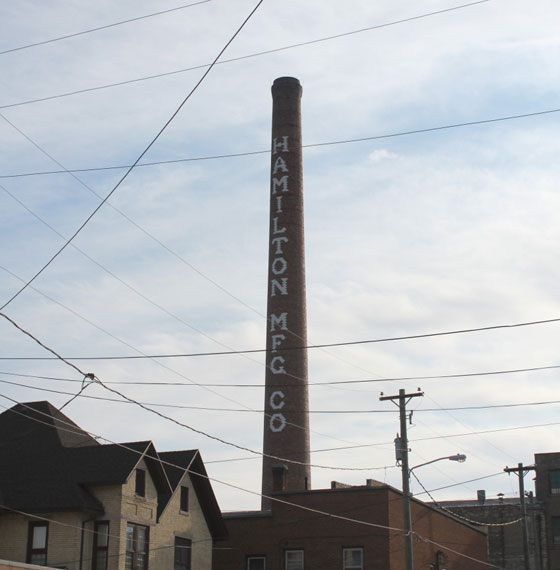 I was welcomed into the museum by the Director, Jim Moran, and Assistant Director, Stephanie Carpenter. To anyone that has seen the Typeface documentary Jim will be instantly recognisable – warm, knowledgable and passionate about the Museum and the medium itself. He is a third generation printer, based in Green Bay, I think ink may run through his veins. After a tour of the machinery and a discussion about the way in which type was produced there (which I would like to cover in depth in a later post), I was struck by how interesting the history of Hamilton has been.

Started in 1880 by Edward Hamilton, it was by chance that he started making type. When a local newspaper needed large type quickly to advertise a forthcoming ball their East Coast suppliers of type would not have been able to ship it quickly enough. With a background in chair and pail production, Ed Hamilton was approached to make the type with the materials and tools available. Opting for a method known as veneer cutting, where the shape of the type is cut using a scroll saw before it is then mounted on a solid block to bring it up to type height, Ed Hamilton produced the type for the ball. As Hamilton’s small endeavour grew to be a large profitable business it is this flexibility that seems to define the companies success. Not being content with only producing the type, Hamilton realised with his expertise they could also make all of the cabinets needed to house the type they were selling. From here they moved onto making cabinets for other professions such as dentistry, and as metal cabinets became the standard they met the demand. It was this knowledge of metal and construction that led them to become the producer of the first consumer washing machines and dryers. Oddly enough if you ask a lot of people what Hamilton made, the washing machines are what the remember. 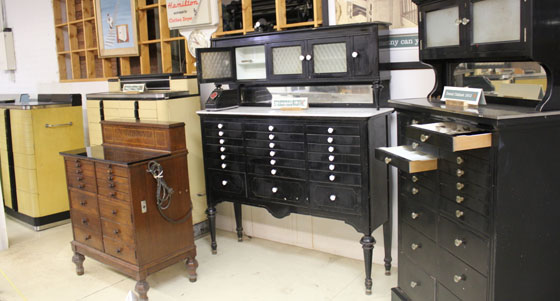 Making good use of the tools available to you seems to be a good mantra for successful letter pressing. The most amazing things can be produced with the most limited of means.